It is with great pleasure I have Isobelle Cate in my dungeon this week. She brings us a taste of Love in Her Dreams, Rapture at Midnight and Forever at Midnight! I'll first test her skills and ask a few questions. Then, I'm turning the whip over to her tell us about three of her books. Enjoy--

When did you first realize you wanted to be a writer?


I first wanted to become a writer when I was a teenager (another
lifetime). I loved reading mysteries and love stories and thought it
would be nice to try my hand at writing but it never took off back
then.


What drew you to write Non-Fiction and Fiction? Do you
prefer one over the other?


I've written both non-fiction and fiction but I felt that I had more
leeway or creative license if I wrote fiction. Both entail a lot of
research – my paranormal stories have a mix of history in them –
but with non-fiction, I cannot bend the facts to my liking or there
will be a lot of academics breathing down my throat! ;)


Of all your characters, who’s your favorite, and why?


I think right now, my favorite character is Deanna Logan from Forever at Midnight. Her resilience after what she had to go through and the sacrifice she was willing to make is something I'd probably balk under. But she was able to carry on despite the hurt and trauma.  That’s something I find admirable.


What about your books? Do you have a favorite? What about it
do you love?


I think Love in Her Dreams would be a favorite because it was
what started it all. Also because I’d like to believe that if you look
hard enough, the man you’re destined to be with is just around the
corner.  What can I say? I’m a romantic at heart. J


What would you love to write someday but haven’t yet?

Were books a big part of your life growing up? If so, what books
would you say influenced you most as a child?


Oh yes, they were. There were no computers then.  I lived in the province and television shows from the city were a week delayed. The more interesting T.V. shows started at 6pm during the weekend I had a lot of time to read.  I read encyclopedias, the speeches of American orators like Patrick Henry, Edith Hamilton’s Greek Mythology to name a few.  I loved Greek Mythology. I still do. I had this book called A Pocket Book of Verse which two of my favourite poems, The Psalm of Life and The Children’s Hour by Longfellow. This book of poems and Kahlil Gibran’s The Prophet influenced me the most.  They still do.


What are two things people might be surprised to know about
you?


I can speak three other language apart from English and I’ve learned to write in a little known ancient script which is at least a thousand years old.


When you’re not writing, what do you enjoy doing?


I enjoy reading the works of other authors I admire, walk in the park nearby, watch telly, do a little window shopping.


Writing is often a sedentary profession. Is there anything you
do to beat stress and keep in shape?


I try to fit a bit of yoga occasionally.  I used to swim everyday but not anymore.


You’re in line at Starbucks. What are you ordering?


If it's Spring:  It's Chai Latte or the semi-skimmed Latte


If it's Summer:  It's Raspberry Blackcurrant Blended Juice Drink


If it's Autumn:  It's the Pumpkin Spiced Latte


If it's Winter:  It's the Toffee Nut Latte


Thank you, Gray, for having me guest in you blog. You’re one of the authors I truly admire and follow.  Looking forward to reading more of your books! Love, Isobelle 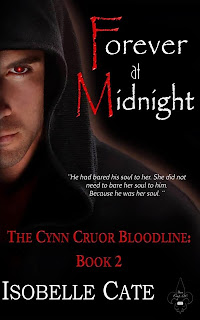 
Roarke catches a glimpse of Deanna in Dac Valerian’s club. He is unable to believe that Deanna is alive when he buried her himself nearly five hundred years before. He searches for her in the streets of Manchester just to prove that he hasn’t lost his mind.  But when Deanna turns up on the street facing the Cynn Cruor’s headquarters, Roarke needs to know why she hid herself from him.


Knowing that her secret can only destroy whatever feelings Roarke has left for her, Deanna remains silent until circumstances force her to reveal everything.


Hearts are broken on both sides but Roarke and Deanna have to work together if they are to find a way of ending Dac and the Scatha Cruor’s power once and for all. Desire rises and passions are rekindled.


Will their pursuit of Dac lead to another chance at happiness?


Or will it forever tear them apart?

Soon, Roarke ended the kiss. Deanna gloried at the pleasure she felt when gold flecks materialized against his pupils. She touched the sides of his eyes.


“I missed seeing those,” she whispered before cupping his face. He turned to kiss her palm. She sighed. “If only for tonight, make love to me again, Roarke. Make love to me so I can forget.”


She saw emotion flit through his eyes before it was gone. Her heart was in her throat, afraid he would refuse. Then his head bent down.


He kissed her again, but this time it was soft and tender, even while his hand was wreaking havoc with her body. Her clit throbbed when he rolled her hardened nipples with his thumb and forefinger before palming her globes lovingly. She closed her eyes, giving in to the moment, her breath coming out in moans and gasps. Then her mouth opened in a silent cry, feeling his tongue flick and suck on her breasts again. She lost all coherent thought, holding on to his shoulders. Lust thundered through her, lighting her up like a fireball.


Roarke scooped her up and walked through the French doors and into the warmth of the loft. With her face against his neck, she inhaled deeply before flicking her tongue and sucking on the pulse at the base of his throat.


“Where?” he growled, his desire unsuppressed.


Mutely, Deanna pointed to the stairs which led to her bedroom. Instead of using the stairs, Roarke catapulted them to the open room's landing with one jump.


There wouldn't be any recriminations tonight. This moment would be for knowing each other's bodies again. To make up for all the lost time. 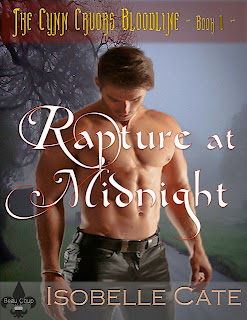 Book blurb:
There is an on-going war between two breeds of immortal warriors who carry human, vampire, and werewolf blood, the Cynn Cruor and the Scatha Cruor. The Cynn Cruor wants to live in harmony with the human race. The Scatha Cruor wants to enslave them. Finn Qualtrough, a Cynn Cruor warrior is on a mission to find Dac Valerian, the leader of the Scatha Cruor responsible for the deaths of many, including his parents. When he pursues three Scatha warriors who can lead him to Dac, he happens upon a woman who awakens a desire within Quinn to claim her as his own.
She is the very essence of his immortal life.
Eirene Spence is an insomniac and a computer genius who loves walking in the park at midnight. She stumbles upon the Scatha Cruor and is almost killed until a handsome stranger rescues her. His touch ignites a hunger inside her that only he can satisfy.
He is her soul.
By some twist of fate, one of Eirene's clients is Dac Valerian. She is able to tell Finn and the rest of the Cynn Cruor where Dac is hiding. Now Dac wants her dead.
Will Finn be able to keep Eirene alive and at the same time fulfill his mission? Will Eirene's wish to be part of Finn's life come true knowing that he is destined for someone else?
Buy links for Rapture at Midnight:
Amazon US http://amzn.to/1chcEQo
Amazon UK http://amzn.to/13ZDhsU 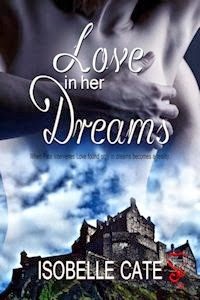 Blurb Love in her Dreams:


Alec and Tamsyn know they are meant to be together though they have never met. And yet their passion for each other consumes them when they dream.
Alec knows that Tamsyn is the woman for him, but finding her at the moment is an impossibility. Or is it?
After resigning from her job, Tamsyn takes a break in Scotland when she feels the presence of the man who haunts her dreams. He is tangibly near and in Edinburgh. The sex they have in her sleeping moments becomes more real. But how can she find him in the streets of Edinburgh when the only thing she remembers is his touch, his scent, his passion?

Author bio:
Isobelle Cate is a woman who wears different masks. Mother-writer, wife-professional, scholar-novelist. Currently living in Manchester, she has been drawn to the little known, the secret stories, about the people and the nations: the English, the Irish, the Scots, the Welsh, and those who are now part of these nations whatever their origins. Her vision and passion are fueled by her interest and background in history and paradoxically, shaped by growing up in a clan steeped in lore, loyalty, and legend.
Isobelle is intrigued by forces that simmer beneath the surface of these cultures, the hidden passions, unsaid desires, and yearnings unfulfilled.

Thanks again for being my guest this week, Isobelle!
Until next time, stay naughty my pets . . .
GRAY