“Target? You are a serial killer,” I shouted, struggling with every ounce of strength I had left.


I wasn’t sure to believe him or not and opened my mouth to give him a few choice words. Before I got one syllable out, he moved quickly, crushing his lips to mine, making all those four-letter words catch in my throat. The power of the kiss caused our teeth to collide, and the sting produced from slicing my lower lip made me grimace in pain.


Lucien freed our embrace long enough to mumble an apology, but then gently brushed another kiss against mine. His lips were so cool, but they were soft too. He applied more pressure and then slid his tongue along my lower lip. I jerked when he hit the nick from our clash of teeth. His hand lowered to the front of my neck, grasping firmly and holding me still. His other hand slid around the back of my neck. He drew me closer as his grip pulled the short hairs at the base of my skull. “I’ll be gentle with you. For now.”


I laughed. In hindsight, I should’ve controlled my nervousness and kept my mouth shut. But, would I have listened? Probably not. “Do you think you’ll get away with this?”


“Oh, little one.” My captor clicked his tongue in admonishment. “Do you think I care if I do or not?”


Before I knew what to say, his tongue eagerly tangled in my mouth. The hand around my neck slid further down and over the side of my torso, slipping around to the back and pressed against the small curve above my ass. Lucien’s assault on my mouth continued, kissing me to the point I thought I became one with him. I could taste the lingering coppery traces of blood from the nick on my lip. I should have known then something was up with him because he didn’t seem bothered in the slightest about sharing blood. Despite the fact I’d been out of practice for a good six months, the evidence pressing into my lower abdomen proved he was very excited, enjoying our interlude. Lucien eased his mouth away from mine and trailed more kisses across my cheek and began nuzzling my neck. His hands tightened at the back of my head and buttocks. My skin prickled with goose bumps skittering up and down my spine.

For more My Sexy Saturday entries, follow back here: www.mysexysaturday.blogspot.com OR go directly to the individual links below.

This is a Blog Hop! 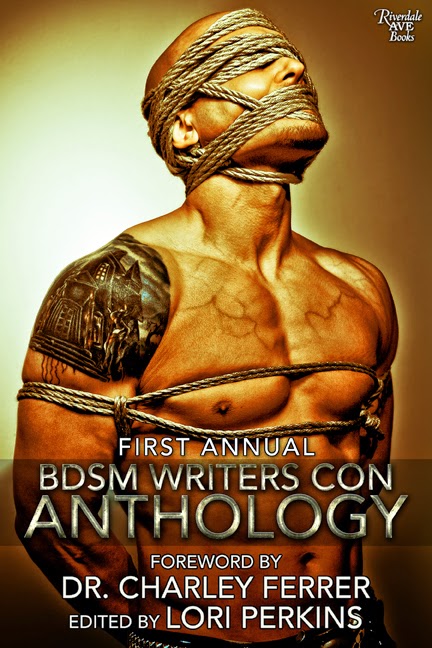 (Not yet available in stores or online anywhere else until after the conference!)