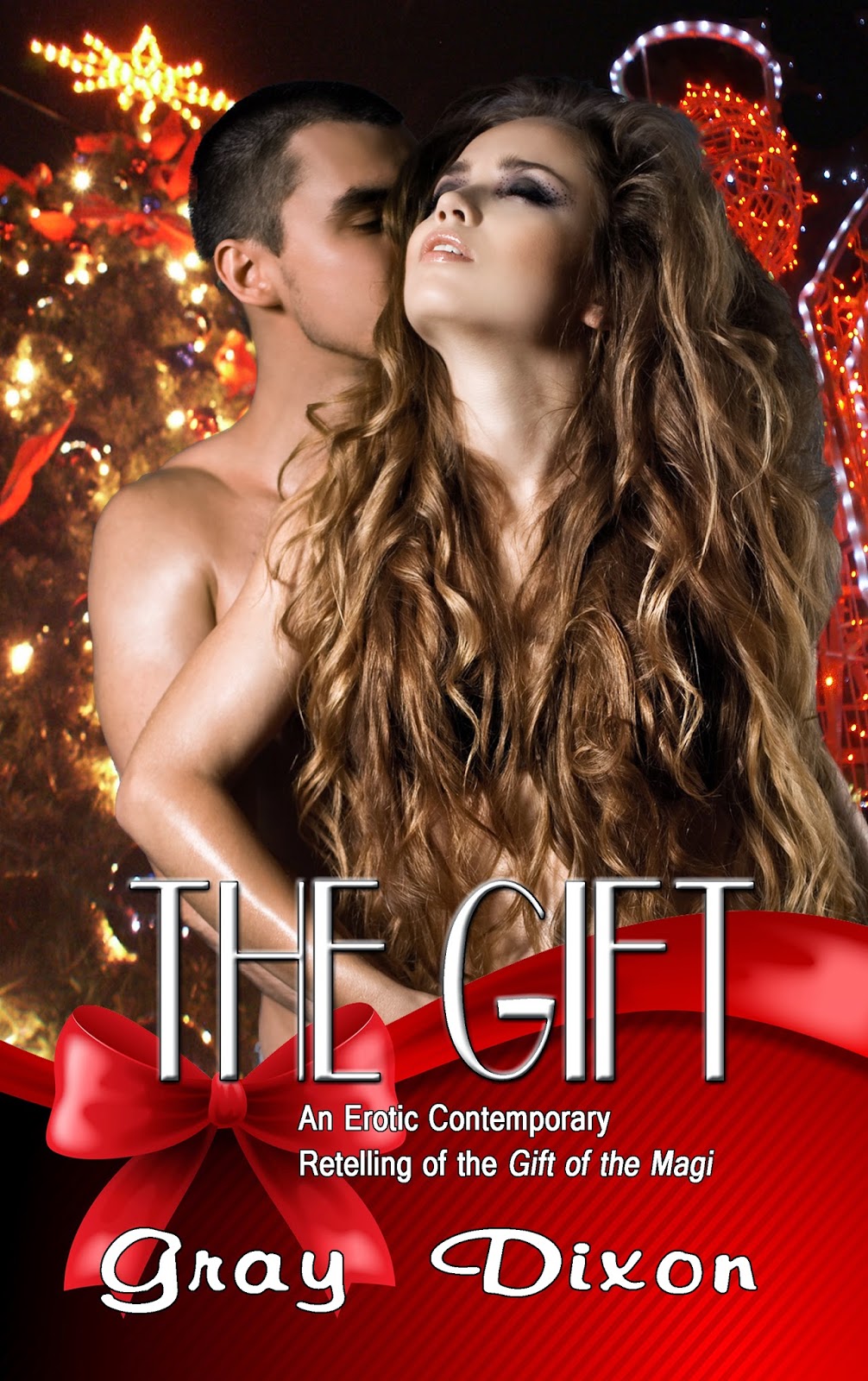 
Christmas Eve. Jennifer Perkins needs the perfect gift for Sir and time is running out. Tough economic times have put a drain on her bank account, but she’s determined to give her lover something special. Short on cash, she sells a treasure, plus more than she bargained.
Christmas Eve. Chris Bryant needs the perfect present for his live-in submissive, Angel, and he can’t wait until tomorrow. He may have lost his job of choice, but the New Year looks promising. Tonight is the night to make a change. The gift has to be extraordinary, and the only way means giving up his prized possession.
The two lovers are wrapped in a world beyond their control. Selflessness is the ultimate gift of love—one relinquishes a valued treasure, the other sells part of themselves for the special gift.
Posted by Unknown at 7:44 PM No comments:

PLAYING WITH A VAMPIRE 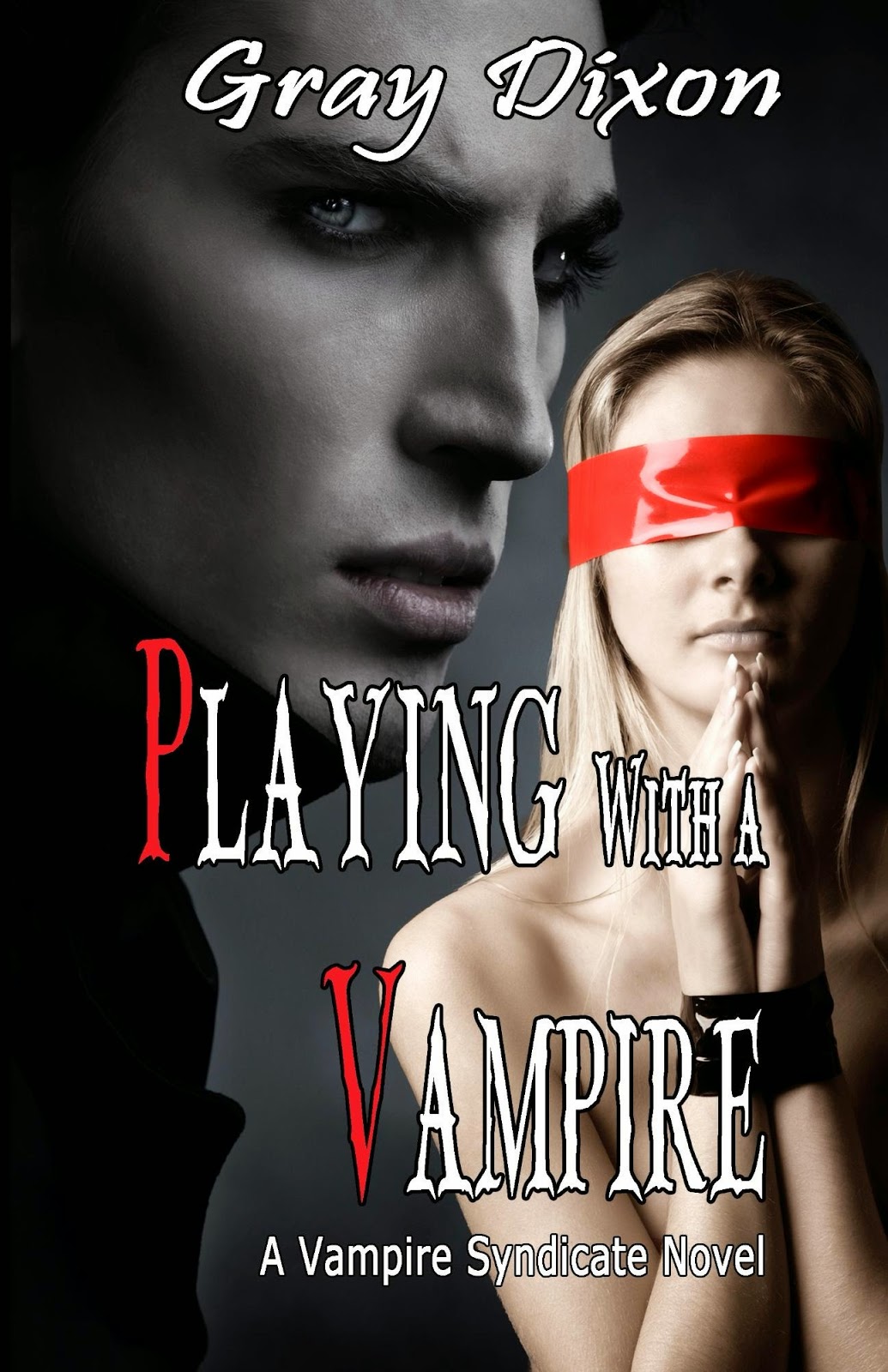 Book 2 with the Vampire Syndicate Novel Series is out! Playing with a Vampire picks up after Hunting a Vampire with Gregori Van Zant and Candi Hartz. Available on Amazon.


Candi Hartz, is a romance novelist, trapped in a loveless marriage. When she finds a business card printed with a vampire club address in her husband’s clothes, she discovers more than a bar. There she meets the seductive owner, the Master and Commander of the local Blood Family. With one kiss she enters a world she only read about.

Three hundred sixty year old Gregori Van Zant, a life scarred and bitter vampire, is the head of the Mid-Atlantic family who recently lost the protection of his Sergeant Palatine and Enforcer. To complicate matters, a captivating woman walks into his club, a human female who is unlike any other. With a fortuitous change of events the next night, Gregori seizes an opportunity to strike a deal, and snare the lovely Candi in his subtle web.

Candi and Gregori agree on a contract, sex in exchange for information, and they set out on a week’s adventure. Candi is born to play and Gregori is anxious to show her how. An old enemy comes to town and disrupts their plans.
With a final battle looming on the horizon, will the two fated lovers find love eternal or will death play a part?

Could his existence find an even keel again after how Dragos Munteanu had disrupted the norm? The spread of a deadly virus and introduction of the highly addictive drug Blue into the mainstream of humanity edged on insanity, but if it had worked, would’ve been a brilliant move by Dragos. Gregori had to admit that much about the maniacal vamp and he almost got away with the plan if not for Gregori and other vamp leaders. To hear the FBI and V Bounty hunters talk, they were the ones who thwarted the plot. Working with humans wasn’t his first choice, but he had no other at the time. Now, the humans were riding high on their success.
Is that why I’m so pissed off at everything lately?


“Master Gregori, would you like another cognac before the next scene starts?” The vamp waitress’ dulcet voice wrenched him from the doom and gloom thoughts.
Hooded silvery gray eyes glanced up to peer at the scantily clad server. “Yes, thank you Sheena.” The young woman had been in his family for almost twenty years. She’d not changed since the day he turned her. Innocence still graced her happy disposition despite what he had to do to save her.


“Very good.” She removed the empty glass and napkin then departed.
Cognac Paradis. What the fuck Stefan? What the fuck indeed. He never drank the strong liquor before Stefan introduced the concoction to the Transfixed and the Black Rose V Clubs as the House Special. No doubt, a blend Stefan brought from one of his European quests. Do vamps get depressed? What’s wrong with me?
Gregori hated the hard stuff. Normally, he drank blood wine, but for some brain fart reason, he took up the foul concoction when Stefan left his employ and moved to Miami Beach. The kick of the drink made his insides warm and fuzzy, and reminded of him of the time spent as a young rogue vampire a couple centuries ago.
Ever the watchful master and lord of his domain, Gregori surveyed the club as he pushed the ugly thoughts of his early years out of his head. Humans and vamps played together, having blood and sex exchanges, with a twist. He’d brought a new and edgy take on a lifestyle club in Virginia Beach twenty-odd years ago. After leaving the New York family, he headed south and landed at the Beach. He never left and when he took over the Mid-Atlantic Blood Family, he revitalized it, but he’d become bored.
Patrons were happy, but something didn’t seem right anymore and he grew weary with the same political bullshit in the town. Nothing excited him, made him feel like his existence have the spark he used to have. Dragos had at least sparked things for a bit, but within weeks the adrenaline high faded.
His new V existence began with similar exuberance at first, reveling in the power that came with the change. At the time, the world welcomed him into the dark, cruel, brutal, and bloodthirsty realm of other vampires. Humans were easy to take and he had no remorse for doing so. They’d treated him with disdain from the day he was born and he owed them nil in return. Women were the easiest. He viewed them for what they were, vessels for his physical pleasure and bloodlust, nothing more. Until he met Lady Johanna van der Ghent in Antwerp, Belgium.
Damn, I haven’t thought of Johanna in ages. It must be the liquor.
Sheena returned with the House Special and placed another cocktail napkin before him and the drink on top, “Your cognac, Master Gregori.”
“Thank you, Sheena.”
The centuries old thoughts about Johanna stirred emotions. The memories and pain were buried deep. He’d locked them away long ago, never wanting them to surface again. Tonight they did, but why?
Just what the world needs a manic-depressive vampire.
He snickered and sipped the foul drink, sliding the biting liquid across his tongue and down his gullet.
Ah, Johanna, the once lovely and vibrant beauty I would have risked everything to make mine forever.
The woman ruined him for every woman that followed. She’d taught him not to trust another again. Or, love. 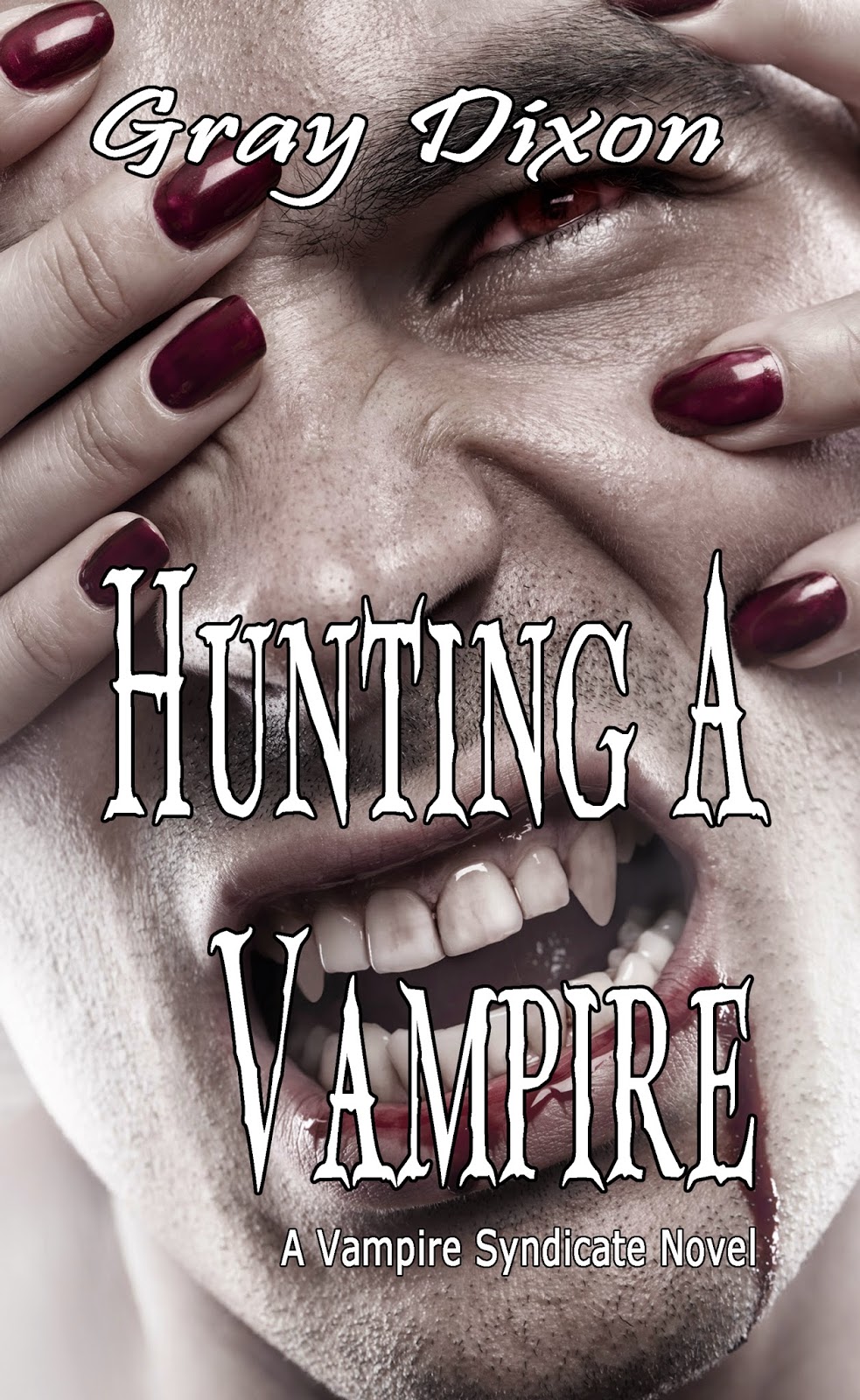 Here's an excerpt from Book 1 of the Vampire Syndicate Novel Series. Available at Amazon, Barnes & Noble, and Smashwords in Print and EBook formats.


Alexandra Carlton, Alex to her friends, is the only girl in a family of vampire hunters. Along with the other members of her profession, she lives and hunts by the Code.

A rogue vamp, carrying a contagious virus, deadly to vampires and humans, is her target. On her first solo bounty hunt, she tracks the menace from Florida to Virginia.

Alex meets Stefan Marin, a brooding 700 year old vampire. He helps her not only on her quest but tames her wildest passions and discovers the true beauty within her, the beauty he loves.

Together they break all the rules and uncover more than a virus—hot sex, an uptight FBI Special Agent, spanking, hot sex, an over protective brother, more hot sex, bondage and submission, murder, and bad vampires.

But will their love survive the wild side they were born to live on?

When she peered back at him on her way to the ladies’ room earlier, his heart had pounded hard against his ribs, and quite possibly his soul took flight as well. Both stood no chance when the edge of her mouth turned up and she smiled at him from across the room. A split second in time, a life-time altered forever.


Walking back to the club from the parking lot with abbreviated short strides, he wanted to take in the evening sounds and smells, to feel what he had hungered for and missed for a long time. Alexandra, in the short time knowing her, gave hope back to him, a reason to continue his existence for one more night.


The air hung heavy with the nocturnal humidity of a mid-summer heat wave. No sea breeze helped to break the stillness. A few clouds partially covered the moon. The sound of cars whirring along Atlantic Avenue could be heard a block away. The humans in the surrounding homes were retiring for the evening. Lights from the windows flooding the area a few hours ago now went dark.


With one last lung-filled breath, Stefan took in the scent of salt mixed with the fragrant flowers. The hint of gardenia and irises in the house adjacent to the Black Rose cast their scents enough for him to pick up. This is what living was about. That and finding someone to share his existence with. Could the intriguing Alexandra be the one?