I'm celebrating my four years with SCP. Below is a sneak peak excerpt to my upcoming release, Master Squire. This is the 6th book in the Masters of Tabu series and my first Male/Male story! It is currently with my editor so what I'm showcasing this weekend is an unedited excerpt. I just wish I had a cover, but that won't be coming for a while. I can only guess what Dawne will have in mind for this one. Fantastic, I'm positive. Anyway, here's the back cover blurb and an excerpt. After you finish reading, check for the GIVEAWAY.

Sometimes the thing someone needs most is the help from a stranger, not what Dr. Zayne Wolfe expected when a mystery man found and took him to a safe place to recover from a beating. That was how the quest to save his brother began.


Later, after a chance meeting at the hospital Zayne practices, Jagger offers friendship and help to the beguiling young doctor. Jagger agrees to help Zayne rescue his brother. Can the last-minute plan work, or will Jagger lose the one man who can heal his battle worn body and heart?


Sadomasochism entered his world many times over the past year. Sex gone wrong, whether kinky, fetish, or just odd uses of toys, always sent male or female into the ER at least once or twice a week on his shifts. The recent mainstream interest in the S and M lifestyle brought more interesting occurrences. From cock rings being too tight and stuck on penises to nerve damage from using handcuffs improperly, he’d seen just about everything. Not to mention whips and floggers damaging skin or using the wrong kind of heated wax causing severe burns.


BDSM wasn’t Zayne’s scene. Not really. Yes, he liked a little pain now and then. Nips and pinches to get off, but nothing hardcore. He enjoyed a little kinky sex, men or women—but this kind of public play? Having to go in and convince Jagger to help, to hire the services of a security company and in a setting of a sex club seemed weird.
Jesus, I can’t believe I’m doing this. This is for you Zach.
The man behind the counter checked in patrons who entered just before Zayne. He was a big man, dressed in casual clothes of a black T-shirt with the same logo as the sign outside silk-screened on the left chest. Tight black jeans and a leather wristband studded with silver metal spikes.
“Thanks Anton,” one of the men checked in said. He turned toward Zayne, smiled and then tugged the leash attached to a collar around the woman’s neck.
Zayne knew this was normal, but the outfit was a shock. He’d seen the same couple in the parking lot earlier and they looked…normal.
“Hey,” the man behind the counter said. “You membership card please.”
“I’m not a member. I’m looking for Jagger Squire.”
“I bet you are,” the big man said with a shake of his head. “I don’t think we’re hiring right now, but if want to fill out an application, you can.”
“No. I just need to talk to him. Can’t I just go inside for a few minutes? I need his services.”
The man erupted into laughter and Zayne rolled his eyes. “I’m sure you’d like to try, but he doesn’t take on pretty boys no matter how much money you offer. We don’t do that here.”
“Look, Anton, right?”
The man pinched his brow, but didn’t answer.
“I’m not interested in fucking the man, just talk. I want to hire his security company and I heard he was here. Can I just go in and see Jagger?”
The man stared at Zayne. Before he could answer, another much taller and handsome man stepped beside him.
Rather than introduce himself, he asked, “What did you say about seeing Jagger?”
“You heard me,” Zayne bit out. “I’m tired and I don’t have time to stand here and argue. This is a matter of life and death. I need to see Jagger Squire.”
The man nodded. “I heard you. I just don’t know how Squire’s going to feel about doing business here.” He paused. “How did you know he was here?”
On edge for days and coming off an intense night at the hospital, Zayne reacted before he could stop himself. “Why the fuck would you care how I found out?”
The man raised a brow and a hard growl came out of his mouth. “I’m one of the owners of Tabu so I don’t think you want to go there.”
“Sorry, it’s just that I’m running out of time and Jagger is my last resort before…”
“Okay. I get it.” The handsome man turned to the other man. “Anton, hand me a red wristband.”
Anton reached in a drawer and handed over the plastic bracelet.
“Wear this while you’re inside. It means you’re off-limits. Come with me.”

GIVEAWAY
As a bonus for reading the little excerpt, please leave a comment below along with your email address. One random name will be drawn by Random.org to win an ebook copy of MASTER KNIGHT, Book 1 in the Masters of Tabu series. 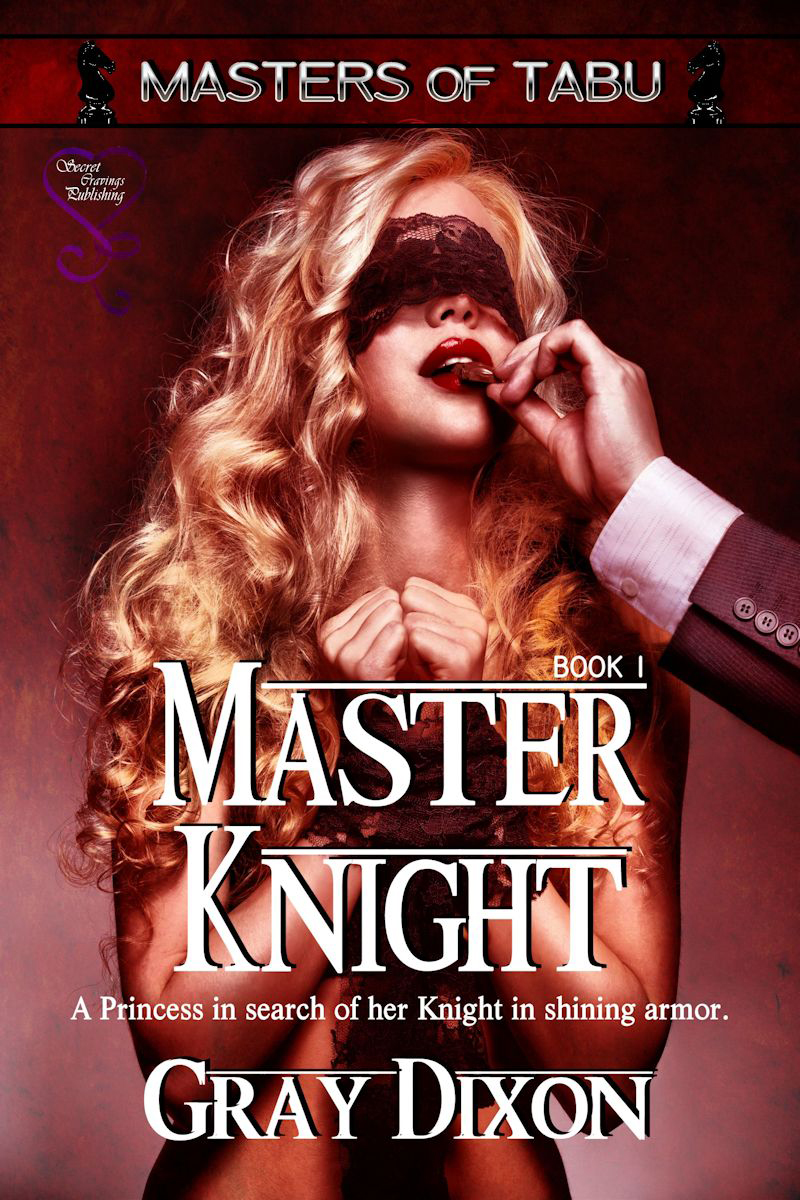 Until next time...
Gray