I want to titillate you with a little excerpt from my latest Bad Boy, Master Prince from the Masters of Tabu Series. But first, I have to lay out the ground rules for the giveaway this weekend. This is a BDSM scene at the club, sensation play, so if you might find it not to your liking, you may want to skip my blog and go to the next author. Second, the giveaway! If you want to read more of this story or maybe the first one in the series, Master Knight, just leave a comment below with the answer to this question: How many Masters will be in the series and the names of the Masters of Tabu? The answer is on this blog. If you want to follow me, that would be great too. I'd love some company. So, the prize is a PDF copy of either Book 1 or 2 to one lucky person selected at random. 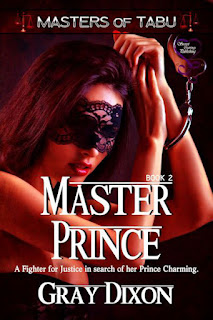 BLURB:
Mitchell Prince, is a Dom with an attitude. He’s the Chief Counsel of Knight Enterprises and has a private practice in Dallas, Texas, which keeps him busy. He’s also a co-owner in Club Tabu and tends to watch and monitor more than have a sub of his own. He has yet to find the right partner to fulfill his darkest desires to control and challenge him physically and mentally.

Will Mitch and Anna plead the fifth and follow the laws of nature rather than the laws they uphold in court?

Another several minutes passed with the tickler gliding over her body with determined focus. Master Terrence for all his bravado lulled her into a blissful, relaxed state. All that changed and quickly.


“Now for something with more of a prick on the skin,” the hulking man said.


She flinched with the first touch of the next thing he ran along her skin. The tiny bites from whatever he used kind of tingled, and the new sensations were more intense than the feather, tickling thing from before. The pinches weren’t painful, but a definite notch up in discomfort. The way Master Terrence moved the piece around the different parts of her body made her start to squirm. The sensations building along the nerve-endings were pleasant, surprisingly so. That in itself was a bit on the disturbing side. I’m naked, cuffed, and restrained, blindfolded and allowing a virtual stranger to touch me. Am I crazy?


“You’re enjoying your punishment, aren’t you?” The soft whisper near her ear brought her out of her delightful thoughts.


With the heightened senses kicking in, the prickle of the tiny hairs along her neck even brought a pleasurable sensation. She could barely think, let alone put two words together to answer him. Two men, one delivering a so-called physical punishment that really felt incredible not painful, while the other used his voice to arouse her in other ways. “What is he using?”


“You want to know? Can you guess?” Prince whispered.


“Technically, it’s a Wartenberg Pinwheel. At the end of a handle, a small metal wheel with many spiky tines rolls along the skin.”


“Oh.” She tried to picture the instrument, but had a hard time. A small, metal pinwheel. Interesting.


“Is she all right?” Master Terrence asked.


The prickly feeling stopped. Her mind raced, wondering what would come next. So far, she didn’t consider any punishment dispensed by the man she wronged severe. Her anxiety began to wane, and her mind drifted again. Had her life become so dull, mundane, predictable that she had to go to the opposite end of the spectrum and fall victim to the kinkier side of life? No, she accepted Prince’s proposal for only one reason. In the midst of this exhibition, however, she couldn’t consider any part of the demonstration as observation by any stretch of the imagination. Hands-on research? Who am I kidding?


She jerked. The ice kissing her lips startled her. The cool water dripped down over her chin and onto her chest. The trickling effect tickled. Aroused her. Master Terrence left a trail of cold wetness down her neck as it trickled down into the hollow formed by her collarbone. Then he moved between her breasts, circling each nipple. Chills started down her spine and warmth built in her core. The first cube dwindled to almost nothing before he stopped to add another in its place. He traveled down her abdomen and swirled the quickly melting cube around her navel. The frosty fluid continued to form rivulets down until it traversed over her curls and over her labia. The coolness couldn’t dissipate the heat growing between her legs. The torture dispensed thus far had to be the most erotic punishment she’d ever experienced and wanted more. She shivered and not because of the ice.


“Are you okay?” Prince asked in a soft whisper again. Tracing the edges of her ear with his flicking tongue, he caressed the silky flesh arousing her passion to a fever pitch. For a few moments, the teasing distracted her from answering his questions.


“Good girl.” He whispered in her ear, “You like the different sensations Master Terrence delivered so far, don’t you? You like letting go of your control over everything and only feel those sensations? No point in denying it. Tell me the truth. I’ll know if you’re lying.”


Guilianna tried to say yes. Prince spoke the truth and was right about denying her feelings, but being at Tabu was completely out of character for her. What would her clients think if they found out, or the press or, God forbid, her sister? Anger surged in her veins, and she bit her bottom lip to fight back the thought of disappointing Audriana. No, this wasn’t like her at all. She’d broken away from the tyrannical domination of her father, gained control over her life, and didn’t want another man to have that kind of power over her again. Yet, she’d had no idea the feeling of helplessness and vulnerability could be such a serious turn-on. Mitchell Prince aroused her more. His gentle and warm caress pushed her into an answer, one she surprised herself by answering. She finally relented.


A light kiss brushed her lips, Prince’s lips. The ones she’d craved all night. “See, little mouse. Professing your feelings doesn’t hurt, does it?”


Guilianna blushed, the heat tingled her cheeks. “No, but I’m extremely embarrassed.”


“Why? Because you think it makes you weak? Do you trust me, Anna?”


The sudden grazing over her clit with the ice jolted her out of the hypnotic conversation with Prince. The shock of the sensation made her jerk against the restraints. Master Terrence held the torturous piece there for a few seconds. Numbness didn’t take long to happen. Then, she felt fingers brushing across her nipples. Which man was it?


“Answer me.” He pinched and rolled the hardening points between his thumb and index finger. His warm mouth sucked one nipple into his mouth and swirled his tongue around the nub.


Thank goodness the fingers and mouth belonged to Prince. She’d been embarrassed enough tonight to last a lifetime. “Yes…yes, I trust you.” She moaned as the exquisite sensation shot straight to her pussy. Floating on the softly building cloud of emotion, the blood burned in her veins, moisture leaked out and coated her inner thighs. The wetness may have been the residue of the melted ice. She couldn’t tell from the overload of the multiple sensations piercing through her body.


“I think you’ve earned a reward for your obedience, little mouse.”


Prince tested her comfort zone again. She sucked in air through her nose, forcing herself to relax. She trusted him even if her anxiety went on high alert.


Oh God, what’s happening to me?


Until another day my naughty pets,