Well, a pleasant surprise but OMG! I got caught with my panties down. A good thing and bad, I have to start promotion earlier than expected. Posting the blurb and an excerpt for everyone's enjoyment. The Buy Link for the publisher's store is: http://store.secretcravingspublishing.com/index.php?main_page=book_info&cPath=4&products_id=528 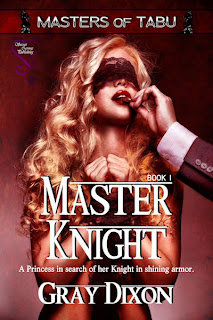 BLURB:
Marcus Knight, entrepreneur and CEO of Knight Enterprises, is a Dom with a darker side. After a nasty divorce, he’s sworn off any emotional involvement with any woman. By accident he meets a woman at a party when he travels to New York City for business. She’s too young and inexperienced with his lifestyle. Or so he thinks.
Khari Bradford, small town girl in search of fame and fortune on the Broadway stage. On a chance meeting, she meets an older man who captivates her. Within a short time, she becomes his newest submissive, but wonders how she ended up with him instead of on Broadway.
Will her new aspiration have her lose both dreams, Broadway and her Knight after discovering he has no intentions of staying in New York or with her? Will Marcus return to Dallas and give Khari her dream, but lose the woman who makes his heart sing?

LOG LINE/TAG LINE:  A Princess in search of her Knight in shining armor.

Speechless, she couldn’t believe meeting one of the best-looking men she’d ever seen came quite by accident. Her heart pounded and electric sparks flitted over her skin that first time. The way he smiled sent ripples of desire straight to the center between her thighs, and when he spoke with the low, seductive voice, her insides felt delicious, warm enough to melt chocolate. The authority he exuded with his body captured her full attention and almost instinctively she obeyed his every command. Each encounter with the enigmatic man was more intense and kinkier. Sir, from the beginning, took her places way beyond her imagination and did so with nothing except his presence and tone of voice. Slowly, by methodic and patient means, he’d introduced her to satisfying ways to express those sexual fantasies she dared to speak out loud to him. To trust a man again filled her heart.
So here she stood, blinking into the darkness of the blindfold, contemplating how her life changed after moving to New York to follow her dream, to this. A tingle between sore legs brought her back from the questioning thoughts. She twitched at the thought of how his skin was like velvet-covered steel and smelled of musky spice. The effect he had on all her senses had her craving him even when not in his presence.
“Hmm, you like the sensation, don’t you?” The silky-soft voice of the man spoke so low, she wasn’t sure if it belonged to Sir. Of course, it had to be him. No one else was in the room. I’m acting silly. He wouldn’t let another man touch me this way, would he?
Nodding, she tried to form some coherent words, but the gag Sir placed in her mouth prevented any audible speech. Saliva slid out the corners of her lips as she struggled to remain motionless by his demands. The flicking across her bare skin by the device of torture he used sent erotic electric charges through every nerve ending. The soft and delicate piece flitting over her skin seemed like a feather at first, but at this point in the evening, she couldn’t distinguish anything, only the pleasure she received from the delightful caress. The pain in her legs from not moving mounted, mixing with the exquisite touches he delivered. He’d instructed her to warn him if she felt numbness or tingling, but the discomfort hadn’t reached that point yet. She loved the bondage, but not to the point of doing something stupid. She squirmed and tried to wiggle her toes despite the tight fit in the high-heels. Circulating the blood to keep any numbness or tingling at bay had been the reason, but the erotic sensations he produced to the other parts of her body helped distract her.
“I see you’re eager, but I don’t want you to come quite yet, my pet.” The delicate stroking of the tickler traveled along her sensitive flesh, trailing circles over her hip bones then lower to each thigh.
Khari took a deep breath, trying desperately to remain focused and to obey his reaffirmed order not to move. She failed, just like all the other times lately. Shuddering from the stirring emotions fluttering through her insides, she couldn’t control her body no matter how she concentrated. He’d told her this was part of the learning curve. Granted, she’d not been one to learn quickly, but this was something she wanted to do to please him, and she felt defeated. For a couple hours, he’d been building her up until she was one large mass of hypersensitive nerve endings ready to ignite, and he wouldn’t let her come if she continued to disobey his instructions.
His touch and the release of the restraints at her feet signaled what would come next, and for a brief moment the muscles in her legs relaxed. He massaged her ankles and calves, making sure she had good circulation. Slipping her killer shoes off long enough to wiggle her toes, she willed the tension in them to calm. His close masculine presence prevented her from moving much more than that until he gave the word. His gentle touch lulled her into a heavenly state of being. Always did. Her pussy contracted, pulsing with need. Moisture seeped from between the delicate folds and down her inner thighs. Her heart pounded fiercely in her chest, and her pulse raced. She was so ready for him to come inside her. God, I can’t take much more of this.
A soft whimper escaped around the ball gag. She concentrated on his touch. His hands explored her waist, rising to her exposed breasts, and then tugged on the clamps attached to her nipples. She jerked with every tug, causing tears of delight, and a tingling darted straight to her core.
“I love to mix your pleasure and pain, my sweet pet.”
Why did his words make her want more? The first occasion he used the devices he left them on for a short time, increasing the tension with each subsequent meeting. Tonight, he applied tighter pressure than usual and immediately attached them upon arriving at the penthouse. When he decided to remove them later, the blood rushing back to the constricted nipples would bring tremendous pain. An exquisite sensation if she played it right.
“Put those heels back on. You know I like the way you look wearing them.”
Reluctantly, she did. She wouldn’t mind so much if he’d remove the gag and clamps, but she knew the time would only happen when he wanted to do so.
“Now. Turn around.”
Her mind went blank and offered no resistance to his commanding presence. With the tingling in her legs and the fading numbness in her feet from the stilettos, she nearly stumbled as she took a step to face away from the sound of his voice. Disoriented for a few seconds, she luxuriated in the warmth of his body against her bare back, which tended to balance her.